With the marine industry progressing and changing over the years, rather than retain costly old inefficient systems, the class has chosen to evolve where it is simple and cost effective to do so. Here are a few modifications we have implemented either due to cost or supply issues. 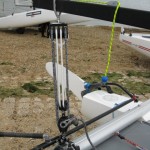 The existing 7:1 Harken system has served the class well for over 30 years.  Production of these blocks has been discontinued.  Harken have now been producing the carbo ratchet range for some years now, a decision has been made to adopt the 9:1 system which offers a much smoother and more efficient sheeting action with smaller diameter sheaves and less weight than the original block system.

A  past rule amendment allowed the owner the option of how they wished to attach their mainsheet to the boom, this still applies.  Methods can include rope or webbing strops, quick release shackles.  The requirement of a stainless steel attachment strap has been dropped. 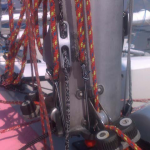 The upgrade to a 16:1 downhaul system was agreed and adopted several years ago.  There is a standard kit available from AW Sailboats utilising Harken hardware.  The Rules and Tech did not stipulate the exact specification other than a maximum purchase of 16:1 .  Variants to the system such as addition cleats to allow a course adjustment of the system are allowable but users are warned that there is a risk of rope failure and to be aware of applying too much downhaul leading to serious damage of the mainsail.

The original class supplier specified kit is deemed to be the most suitable and cost effective. 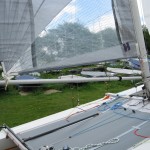 The stock supply of the original rectangular boom section dried up several years ago.  It is no longer economical to purchase a stock of new extrusion from the boom section manufacturers.

Having taken a look at what the majority of new cat design classes are using the natural choice was a tubular section.  It was decided that a 2 “ section would be more suitable for the class. to take into account the loads exerted using the standard pinhead sail sheeting position. It is also worth noting the ready supply of 2” section floating around most boat parks in the form of broken Laser topmast sections. You can simply buy the custom made inboard boom end fitting which takes the existing gooseneck arm and fit out a 2.5m Laser section. 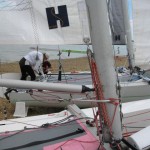 Due to the variety of mast rotation systems within the class and both complex/ simple outhaul variations on other classes using tubes it has been decided to leave the options of fitting out the new boom section tube to the individual.  The rule governing mast rotation stated a maximum purchase of 5:1 which is still current, equipment optional.  There have been a number of systems developing over the years, originally a straight to the boom/spanner cleat only, off the boom to a flip flop cleat on the back of the mast or down through the trampoline and out to the end of the main beam.  They all have their benefits both in practicality and cost. 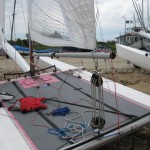 The existing internal outhaul system has a 4:1 purchase which will remain the maximum allowable, equipment/system optional.  The general trend appears to be moving towards a simple 2:1 purchase based on the fact that the outhaul self adjusts with downhaul tension and only needs occasional adjustment, most likely between races.  The option is open to the 5.9er to choose a system that suits their needs/budget 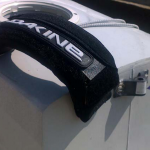 Class rules state that up to two webbing reinforced footstraps per hull are allowable.  Rules and tech have agreed that any of these foot loops can be placed on the trampoline as well as the deck edge.  Providing they are made using a webbing reinforced material,  the design is optional.

The existing FX6 tiller extension has been a long standing tried and tested friend of the class.  With the manufacturer no longer trading, the time has arrived to take a look at an alternative. This is under review by rules and tech. If you break your extension, contact AW Sailboats for the latest update.

The original concept of the SX kit was to allow the rig to be changed back to two sail mode quickly and efficiently.  Due to the success of the SX rig it is clear that only a minority actually carry out this exercise.

Rules & Tech have agreed that there is no longer a requirement to carry barbour hauler fittings or shroud adjuster plate mounted jib cleats when in SX rig mode.  The removal of the crew reaching line system is also permitted to facilitate the attachment of foot straps to the transom.

Please contact Andy Webb at AWsailboats for further information or to place an order for any of the items above.