Island Yacht Club at Canvey Island, Essex, hosted the 2019 Hurricane 5.9 SX championships over three days at the end of August. With 29 hurricanes, a fantastic force 3-4 forecast and sunshine, all was set to be a great weekend of racing. 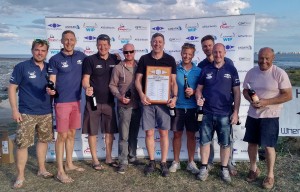 Right from the off, IYC and event sponsors James Heys & Sons, ARS, Dudbridge Supplies and Paul & Pam Soderberg gave out fantastic goody bags. Accompanied by an army of helpers, the fleet navigated out to the start. Race 1 set the tone for the event with frequent place changes and a fast pace meant those with their eyes out of the boat found their way to the front with Richard Hanmore and Dave Elias winning, Paul and Robert Palmer second and Ben Cutler-Sharp and Kez Wiltshire in third.

With two more back to back races in the same conditions, it was John Ready and Josh Hunt who took race 2 with Trevor Bawden and Tom Wass taking second and Paul and Robert in third. Race 3 saw locals Lloyd Turner and Harry Lucas make the most of the turning tide to take the win from fellow locals Mark Mawditt and Tiffany Carter with Richard and Dave in third. 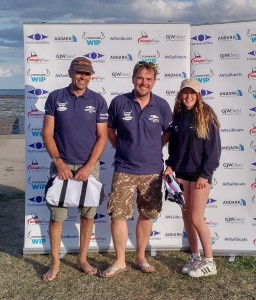 Day two dawned with similar conditions, the fleet were so keen to get going in Race 4 that eagerness combined with wind against tide pushed the fleet over, causing a general recall. The second attempt was clean with everyone getting their eye in on the tidal movement and was followed by yet more frequent place changes. This time it was Jack and Dan Tindale taking the win from John and Josh and Paul and Robert in third. Race 5 got under way with an easing breeze bringing John and Josh to the front with Richard and Dave second and Paul and Robert third. By the time the last boat finished it was drifting conditions.

Concerned about the tide heading out and the forecast of wind filling, race officer Kevin Turner started Race 6 and the fleet drifted up towards the top mark thinking at least we are drifting back towards the club house! It turned out to be a cracking call with the wind filling in fast on lap one and providing the strongest breeze of the regatta topping 20knots. Father/Daugher duo, Doug and Izzy Smith we’re making the most of it going round the top mark in second before a spectacular pitch pole resulted in a broken boom and a long slow sail in. Thankfully all was fine and they were back on the water the next day. There were plenty of capsizes but notably 13 year old helm Tesni King, with her father Bill crewing, kept upright for the duration which was a fantastic achievement in those conditions. Paul and Robert took the win with John and Josh in second and Jack and Dan in third. 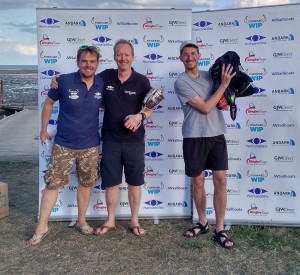 After a great social on Saturday night and a few sore heads on Sunday morning, two quick races in slightly shiftier conditions were on the cards. Race 7 saw Starcross crews come to the front with John Donovan and Nigel Hingston battling with Ben Cutler-Sharp and Kez Wiltshire all the way round with Ben and Kez taking the win from John and Nigel with Thorpe bays Julian Reichart and Jeremy Sandford in third. The final race was again more of the same shifty conditions with Trevor and Tom sailing in a different league and motoring off in to the distance to take the win from John and Josh followed by Jack and Dan.

With some tired bodies on shore, a super consistent Paul Palmer and Robert Palmer took the overall win for the regatta, with Trevor Bawden and Tom Wass in second and John Ready and Josh Hunt in third.

With 7 different winners from 8 races, this event proved how competitive and great value for money this fleet can be. The top dozen boats were all in contention for the podium every race which meant the slightest error cost places which is a great achievement for the class. To top it off, with the family atmosphere and everyone willing to help each other, it really is a great class to race in.

The nationals were the fourth stop of the Hurricane class series supported by AW sailboats, Andark, Forward WIP, GJW insurance, M2 Graphics and Sailing Chandlery. John Ready and Josh Hunt took the travellers trophy with a win and two seconds over the years series events.

More photos can be found at http://www.championmarinephotography.co.uk/events.asp

With such great action we are really excited for 2020!